I am far from original when I post on social media another “todays office” picture.  I am lucky to work in the parts of this country I work in across the north west.  But…. and you saw that coming I am sure, It does tend to be the same parts!  So mid way through the silly season (April to July) I hatched a plan to get some hill time for myself as a solo mission…. between work, holiday, parenting, my wife’s work and life and stuff we narrowed it down to a window over two days in early August.  So that was that then.

My plan was to bag a few Wainwrights in an area of the Lake District I did not really know.  What with the weather we have been enjoying this summer, one could almost say I was getting quite excited! some hill time, a wild camp, more hill time and a pass to enjoy them. Brilliant!

I decided on the Northern Fells, beyond Skiddaw Forest/Blencathra. I had not been up beyond there before and decided that nine of these hills/mountains could be strung together in an approximate 30 km route.  Over two days this would be ideal.  Whats more having finally got my entry in for the ROC Mountain Marathon, I could use this as  training and so treated it as a “fast & light” exercise the aim being to achieve a gentle run, practice some micro nav and do all that carrying a mountain marathon kit list on my back.

The afternoon of August 3rd arrived and once I’d tagged my wife on the parenting front I set off, slightly later than planned up the A65 to avoid any M6 Friday northbound problems.  I found road works instead!  Eventually arriving on the road out of Mosedale where I figured there would be somewhere to park – there was (thank you Google Earth), plenty of spots fortunately.  I set off at 17.00 (I’d hoped for 3.30-4.00 ish) in gentle drizzle, warm, but you could see that the visibility would be limited on the tops.

The first objective was Carrock Fell (663m). I’d planned a fell runners line straight out of the valley, anticipating an element of bushwhacking – it being the height of summer and the ferns at their deepest. what I hadn’t anticipated was the density of the heather, the amount of gorse and the scree banks peppering the sides of the fell.  Although steep, the angle in fell shoes is not intimidating (go Mudclaw 300’s!) but what was tricky was the combination of loose surface, prickly bushes and impenetrable shrubbery!  I’d clocked a path on the map and decided to follow that up, the path ended on the map, usually they carry on in the real world on the ground… this one may as well have met a brick wall! I couldn’t get round the gorse and scree combination, so  I retreated back to the road thinking I would just jog the 2.5km on tarmac to the actual right of way up Carrock Fell, unless I spotted a clearer way through the undergrowth, which I eventually did. Phew.  By now the weather was lifting and I was fortunate to get a shot like this:

Carrock Fell has a real charm to it.  With old earthworks and stone formations on top (‘fort’ on the map), it is also right at the edge of the park and offers great views over the less hilly parts of Cumbria to the east.

Pleased to have finally bagged the first hill of the day an embarrassing two hours hours after I set out, I hatched a plan that the next hill  – High Pike (658m)- would likely be the last today, aiming too have topped out on this an hour later or so at 8 pm.  After the top of that hill, I would then find somewhere to pitch up for the night.  That gave me plenty of time to find a good pitch, get water and feed myself in day light. I had a couple of locations in mind looking at the map, but had given myself plenty of time to choose. Site selection really is the difference between a good nights sleep and a poor one when wild camping. By now the visibility had dropped again and the mist was down, making progress slower but to be honest much more fun!  I had to proper navigate!  Great Mountain Marathon practice, using aiming off, hand rails, catching features and timing I got to a misty High Pike at 20.01.  Perfect timing!

My first choice on the map wild camp spot was just off off the Cumbria Way by a gil which looked like it might offer both fast flowing water and several flatter areas.  Off I set in to the gloom…. it was not long before I noticed this:

A building?  I checked the map – yep definitely – a tiny one – marked on the map but not one I had noticed, choosing the breadth of Cumbria Way and a sheepfold and water course or two to navigate by. Well a building may provide shelter from the wind, it was on the track so I knew I was destined to check it out.  As I got closer I saw the door was open and it dawned on me it was one of the Lakes Bothys.  A bothy being a simple shelter designed to offer a roof and walls for the night for free,to whomever needed it.  Some are literally just that, four walls and a roof, others are quite stunning with open fires or stoves, tables and chairs.  Now this was a game changer! Never mind wild camping  when there is a bothy on the menu!

I got closer to… 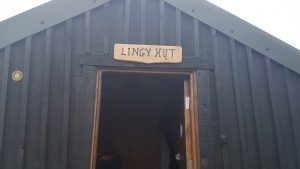 And a voice loomed out of the dark – “alright mate” Rather making me jump, but in I bowled to say hello to the occupant.  First thing I noticed was he was the dead spitting image of an old mate of mine (Duncan) he even sounded like him weirdly. We got chatting – he didn’t seem like an axe murderer (I couldn’t see an axe) and said he would be grateful for the company as he was on a through hike – self supported – of all the Wainwrights (that’s 214  hills!) as his holiday.  That was my decision made – anyone doing that in one go would be well worth the conversation, so I decided to sack off the tent and go for water to then return and spend the night in the bothy.  And what a top decision that was to be!

Kyle, as it happened lived in a town 20 minutes from me in Burnley and worked in the outdoors.  This meant he must work for Robinwood – yes he replied!  Which meant we would know some of the same people, which of course we did…. small world indeed.  Kyle was a great chap to natter to for the evening and when the time came to close the door and batten down for the night, the bothy decision was looking inspired… until 8 minutes past 2 in the morning when some voices could be heard outside:

” Oh look a bothy”, “yeah, thats Lingy Hut” “shall we look inside?”, “no we better not, in case there is someone in there and we wake them”

Too bloody late for that mate!

A bleary morning followed but the forecast better weather looked like it was on the way for the day.

Kyle was up and away early I took a more leisurely pace getting ready. To be fair poor sleep on top of a dodgy dehydrated meal I had ‘tried’ the night before and actually abandoned a few spoons in to it – it tasted and smelled chemically vile – had left me feeling a wee bit fragile….

A big part of the Bothy Code  is to leave the bothy better than you found it. So I made sure I gave the place a good sweep through and took some other peoples sweetie papers with me and by  7.30 am I was off to collect seven more Wainwrights and several connecting hills between them. The weather was drier for sure but the cloud base was low – about 550 to 600m so I was back on nav mode and moving well, fueled by Haribo, Babybel cheese, coffee and a cereal bar or two.

Next on the list was Knott (710m). The biggy of my plan and from here had it been clear I would have been able to see all the target hills for the day.  Never mind!

Tempting as it is to post a number of pictures of summit cairns surrounded by mist I shall resist…   The day passed quickly and I felt as though I was making good steady progress and feeling stronger than I thought I might  having not tackled this number of hills at pace in a while. From Knott, I headed to Great Sc Fell (651m) to Little Sca Fell then on to Brae Fell (586m) which looked lovely in and out of the mist, before climbing back up and over some gils toward Longlands Fell (483m) Lowthwaite Fell, Meal Fell (550m), Great Cock Up (526m) then ascending Burn Tod, over looking Frozen Fell targeting Little Calva and Great Calva (690m) to then descend back to the valley bottom and return to the van.

By Little Calva the weather was lifting and the sun was becoming el scorchio.  The last 90 minutes of my foray were very pretty but tough in the heat.  The whole area is one to visit again…. if only I could guarantee the views!

I got back tot he van just before 14.00. Perfect really as the van was still there and I had said I would be home around 16.00.

Cant wait for the next trip out – it was great and has reignited my desire to bag the Wainwrights.  118 done, 96 to go….

To contact me to discuss navigation training/coaching for walking or running or indeed any other hill skills you can contact me here.