I wasn’t going to write this one.  After all, I’ve described the Tour in all its glory here before.  But this one was different.  I felt ready for this one.  I have had a good period of consistent running – not the distance, but I definitely have the time in my legs ( and on my feet!) and I run very much as a head game – if I feel good I tend to run good. I’d even got a couple of good recce’s in over the previous few weeks to refresh my memory of the route having missed it in 2017 due to a last minute work commitment cropping up. 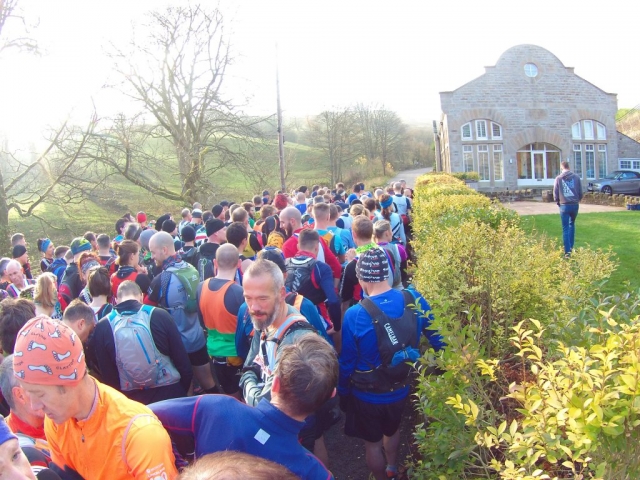 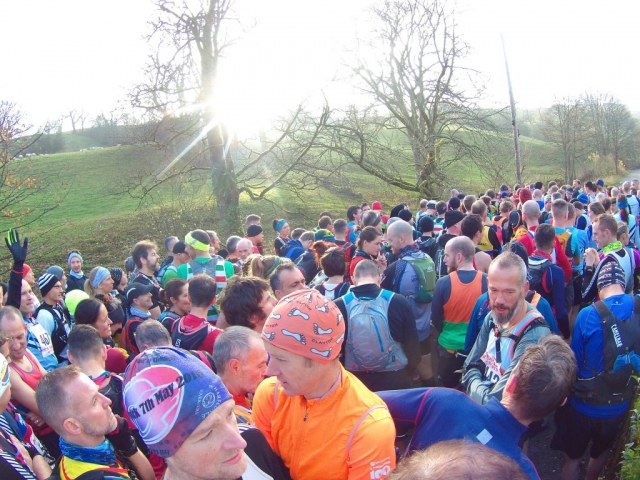 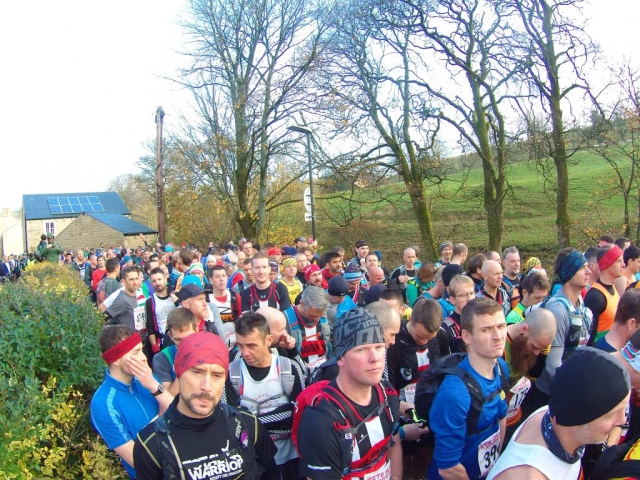 So I started the race at just after 10.30 am on Saturday 17th November feeling good, strong and light on my feet.  The first few miles bore testament to this, I was where I thought I should be in the field, some familiar faces around me in the pack.  the usual bench marks of performance (“if I run *this*  uphill bit I am running well”) I was trotting over quite smoothly. My breathing was good from the word go – since running with a race vest rather than bum bag I have noticed my breathing has been better, where as I have in the past struggled to get my breathing right early on in a race.  There was some good banter with fellow fell runners and club mates on the way up, including supporting a chap new to the race (and as it turns out fell running! – what a way to start!?). All in all a great way to start one of the toughest races in the calendar. 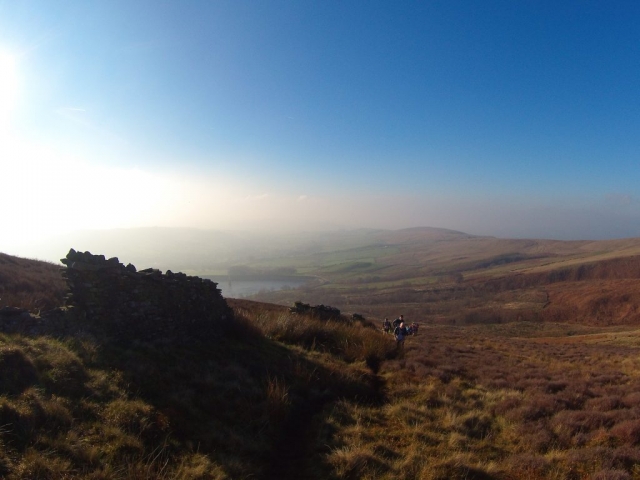 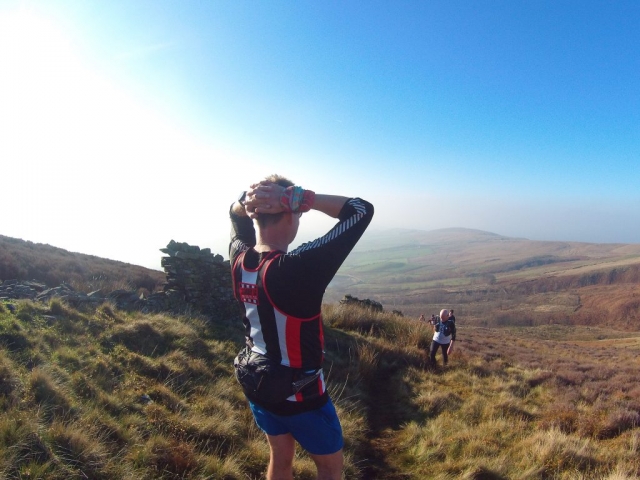 And that’s how it continued.  I even took a gamble on an experimental line across the moor from CP 1 to CP 2 which paid off – I got ahead of several faces in my immediate pack as I crossed the CP1 hurdle – some came back at me and got back ahead by CP3, some did not.  Result! Even the cut off at CP4 (be through by 12.30, at the bottom of the legendary ‘Geronimo’ descent) I knew I would get through, but to do it by the best part of 25 minutes was very pleasing.  Plenty of chatter to the marshals and some thank you’s as well, in the most stunning of conditions – even the mist lifted to offer a ‘haze’ against clear skies.  It was a cold wind for sure, but  not so strong as to impede progress. 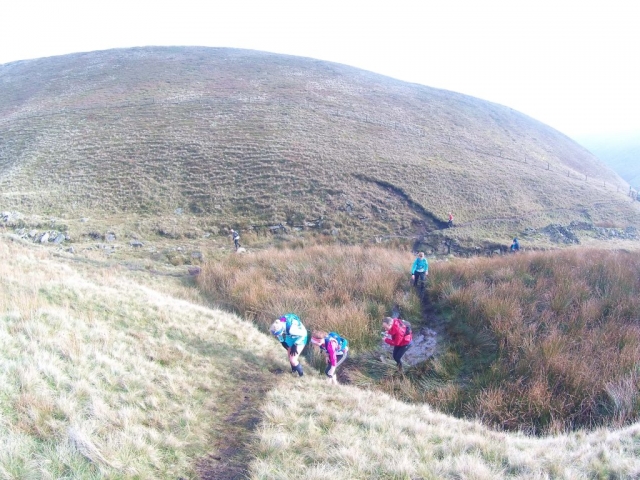 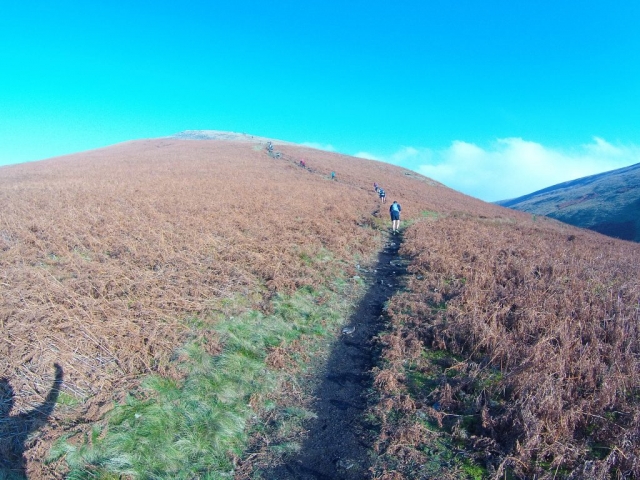 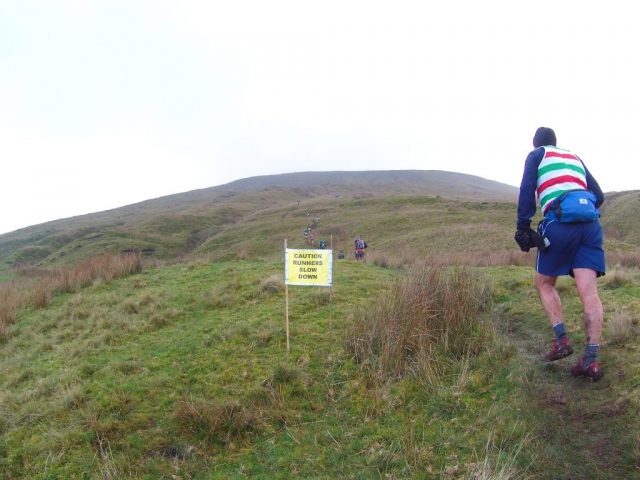 Other things that went well – clothing – 3/4 length running leggings with a long sleeve base layer (no zip) with club vest over the top, race vest (Alpkit – Artlu) over that.  Innov 8 Mudclaws (classics) I had forgotten my cap – which would have helped manage the bright and low sun, but it was no biggy to not have it. Plus the usual FRA race kit.  Nutrition. After porridge for breakfast I had with me two Babybel cheeses, four small lumps of Malt Loaf, three SIS Gels and over three containers – about 950ml of water, 500 of that had SIS Electrolyte tabs in.  Also a small bag with some wine gums and jelly babies in it. The pics I took were on a MUVI camera, best described as poor mans GoPro. Its the ultimate point and shoot as there is no viewfinder on it.

The only point I had to dig deep was on the final climb, from CP9 to CP10. up the Big End, from its lowest point on the moor to its highest just before the actual summit. Truth be told – everyone has to dig deep here and its fair to say that I gain  a degree of motivation from schadenfreude.  I focused on a steady step pattern and keeping as light as I can on my feet as I passed a few on the way up.  It seemed to work.  I got to the top able to keep moving, where as some around me were pausing for breath. I even donated my final Babybel to a club mate who was bonking big time. 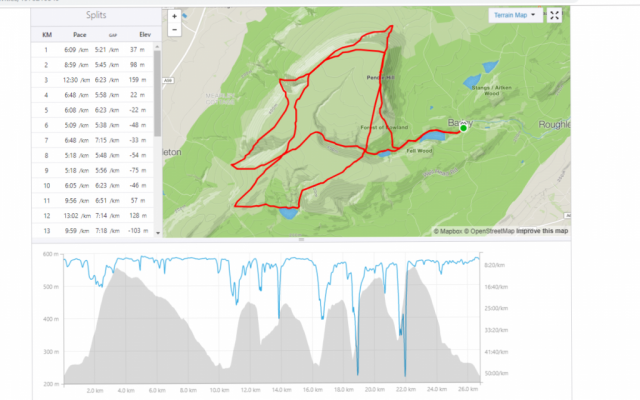 So why am I tapping this out then?  Well, my finish time was 4.12 on my Garmin (Strava here).  The official results are not out yet, suffice to say I was very pleased with 4 hours 12 minutes.  I wanted sub 4.30 and got it comfortably. I was buzzing!  I would have been happy with a 4.29!  I am on the whole not one to obsess over times, if I ran well; I am generally happy , better than the aim I set myself  –  I am more pleased. Better than the previous time – I am over the moon.  Having said that I never look the previous times up before a race, preferring to run on feel rather than time pressure.  When people ask me what my Tour PB is I always say its about 3.45 I can never remember what it actually is… so 4.12 is quite away short, but that’s okay I was happy with the time and more importantly the way I ran and felt all the way round. SO in getting home to record the result on my log of races (GEEK) I casually check what my PB is… 3.43.  gosh, quite a way short then.  That prompted me to look over previous results:

Making 4.12 in 2018 My second worst time running this race!!!  How does that work?? How can I have felt so good, had great conditions and seemingly ran so well to deliver as duff a time as that!  I was slower than the snow year where you couldn’t actually pass anyone or else you were in knee deep snow!

So can someone please contact me with an address for the running gods.  I have a complaint to make.